In the typhoon-ravaged heart of the Philippines, many hospitals were badly damaged or destroyed by the storm. NPR photojournalist David Gilkey and reporter Jason Beaubien visited one battered hospital that continues to serve patients.

More than a week after the storm, the staff at Divine Word Hospital are simultaneously trying to patch up the hospital and take care of patients.

In the courtyard of the hospital, men fight thick, black mud that was left behind by the storm surge. Typhoon Haiyan ripped the roof off this solid, four-story hospital and threw it down in the courtyard. Air conditioning units were flung in to the rooms and windows were smashed.

The lobby of the Divine Word Hospital in downtown Tacloban has been turned in to a makeshift triage ward. The crowd of patients spills out into the parking lot.

Sister Eliza Arpon says the typhoon did extensive damage to the hospital. Shoulder-high water destroyed equipment and most of the medicine in the pharmacy on the first floor.

Arpon says in the immediate aftermath of Haiyan, the hospital worked only on an outpatient basis. They bandaged the storm victims that they could and sent the most complicated cases to the regional government hospital near the port.

Nurses are doing their best to organize a list of patients seeking medical attention. In the days after the typhoon, another group of Catholic nuns in Manila sent dozens of boxes of supplies to the Divine Word Hospital, but the boxes got caught up in bureaucratic and logistical delays. Some of them were stolen.

The hospital has no electricity, so doctors take advantage of the daylight to operate on the injured in hospital hallways.

Other injured patients line the same hallways, where nurses tend to wounds and take vital signs.

The heat and humidity make aid workers' jobs even harder. Some assistance has managed to reach the hospital from other aid groups, and Sister Arpon says she feels blessed.

"We are just so thankful despite of all this," she says, "because you go on, you can survive." 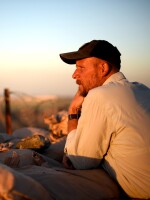