In a striking scene that recurs throughout Petal's WXPN-premiered music video for the track "Better Than You," frontwoman Kiley Lotz engages in a nightmarish game of Whac-A-Mole. First, she's the one wielding a big foam hammer, face covered in grey carnival greasepaint, grinning hysterically as she dives after skittish heads popping out of the cork board below her. Later, she's one of those heads, nervously looking around and then retreating as a bigger, scarier version of herself lunges in.

Breaking down complex feelings of self-doubt surrounding creativity is just one introspective piece of Petal's sophomore album Magic Gone, produced by Will Yip and out in June on Run for Cover Records. Lotz said via press release that the album documents her journey from being a "closeted queer person struggling with chronic mental health disorders" to coming out, coming to terms with her anxieties, and making positive change in her life.

We hear that in the uplifting fuzz-rock riffs and soaring pop melodies on "Better Than You." And we see it in the video, directed by Christopher Good and designed by Andreina Byrne. In the high-energy, colorful montage, Lotz sings against bright backgrounds, plays with giant puzzles in a suburban parking lot, dances amid streamers hanging from a ceiling, and finds a palpable release by swinging a Fender Strat to tear them all down.

It's a fitting image for "Better Than You," a song that Lotz — a product of the Scranton, Pa. emo/punk scene — described on Twitter as being "about how the music industry makes you question everything about urself."

Sometimes you're the one with the brave face rocking the stage with bravado, socializing with other bands for hours on end after the gig is over; other times you're playing to an empty room, or worse, being ignored by a crowd who's there to see somebody else on the bill. As the existential questions start to circle round your head — 'What am I doing?,' 'Am I good enough for this?' — you want to be literally anywhere else. But the stage is exactly where you want to be and therein lies the problem.

As the chorus goes, "Maybe if you tried harder to seem like you didn't love it / But you do. But they're better than you." 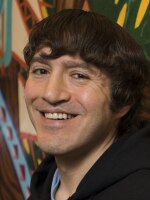 John Vettese
John Vettese is a music writer and photographer based in Philadelphia. He is the editor of WXPN's music blog The Key, producer of the audio/video live performance series The Key Studio Sessions, and a contributor to Magnet Magazine.
See stories by John Vettese
Latest News From WESA