I promised to keep you informed on the status of Federal funding for Pittsburgh Community Broadcasting, and there is some good news to share.

On May 5, the President signed the $1-trillion-dollar compromise appropriations bill that averted a government shutdown through September... and secures our Federal funding--and that of the entire CPB-funded public media system--at current levels until September 30, 2019.

This is a victory not just for public radio and TV but for the tens of millions of Americans who rely on public media...but it is only a short-term victory.  Federal funds for CPB are appropriated two years in advance, so if funding beyond 2019 is to be relied upon, Congress will need to act by the Fall of 2018.

While Federal funds for WESA and WYEP make up only a small portion of our total budget (less than 6%), they are an important element of our revenue that would have to be made up elsewhere if lost.  More importantly, Federal funds (made available through the Corporation for Public Broadcasting) are the investment that binds America's public media system together:  without it, the infrastructure we rely on to obtain programming would be lost, and many public media outlets across the country, particularly in economically-challenged and rural parts of our country, would be forced to close their doors, ending forever public media's promise of universal service: available regardless of location or ability to pay.

Direct support from individual members remains our most significant and most reliable source of revenue, and we are grateful to the thousands of Western Pennsylvanians who not only listen to our services, but support them by becoming members. 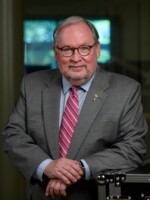 Terry O'Reilly
A multiple award-winning producer, journalist and executive, Mr. O’Reilly has more than four decades of media experience. He comes to PCBC from Minneapolis, where he served most recently as Senior Vice President and Chief Content Officer for Twin Cities PBS, one of America’s most innovative and influential public media institutions. There he led creation and distribution of public television programming for the Minneapolis and St. Paul communities, and also the creation of award-winning primetime and children’s programming for the national PBS system. During Mr. O’Reilly’s tenure at Twin Cities PBS it was the highest-rated local public television service in the United States for three years running, and he was recognized with more than two dozen national and regional Emmy® Awards.
See stories by Terry O'Reilly