Teens can explore the art of drag at The Andy Warhol Museum's new School of Drag Workshop Series this summer.

During his heyday, Pittsburgh native Andy Warhol produced his work in what was fondly known as "The Factory"--a succession of different New York City studios where he and his arsenal of assistants created paintings, photographs, performances and experimental films. Though Warhol died in 1987, "The Factory" lives on in his namesake museum, and beginning next month, will be home to instructional sessions for teens.

"Drag" is a performative art style that tends to transcend traditional gender roles. Performances typically consist of artists--also known as queens--dressing in highly-stylized or dramatic costuming and make-up. They often lip-sync on stage.

The seven-week workshop is recruiting teens to participate in free classes focused on immersing them in the world of drag. The program is free and taught by professional drag queens and performers who will help students dive into the movement's historical and cultural roots, as well as direct students in the creation of their own gender-bending personas. The series will culminate in a showcase where teens and professionals alike will perform in front of an audience.

Local drag performer and session instructor Rhetta Lynn said the Pittsburgh drag scene is flourishing. Programs like this, Lynn said, allow young people to explore how they express their gender.

"They play around a lot more with the concepts of gender and performance,” said Lynn. “And that's something that I see not only as drag is becoming more popular, but it's sort of morphing and evolving into something brand new, which is absolutely exciting."

Though drag has seen a recent boost in cultural visibility thanks to the popularity of reality television shows like RuPaul's Drag Race, performance that crosses gender lines has a long-standing place in art history, including in Warhol's own work.

Alex Taylor, assistant professor of the history of art and architecture at the University of Pittsburgh, cited Warhol's copious works of portraiture as those most clearly aligned with themes of gender and identity performance. His 1974 photo-portrait series, "Ladies and Gentlemen," for example, consists of around 500 Polaroid photographs and 200 screen prints of New York City drag queens.

Taylor said Warhol, RuPaul and the other queens from the Drag Race series are a big reason why queer identity is “more culturally visible.”

The summer program is modeled off of another school of drag series out of the Museum of Contemporary Art in Tucson, Arizona. The Warhol museum’s Inclusion Programs Coordinator, Shannon Thompson, said they hope that the museum can continue to engage teens that fit under what she describes as the “queer umbrella” outside of their annual LGBTQ+ Youth Prom.

“We were definitely thinking of how to, kind of, extend our offerings to that community and make sure that their engagement with the museum was sustained, and that we were serving them throughout the year,” said Thompson. “And this seemed like a really good way to do that.”

The program, set to start the second week of July, will accept applications until midnight on Friday. 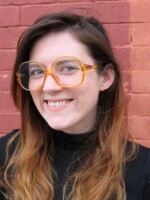 Hannah Gaskill
Hannah Gaskill is a Carnegie Mellon School of Art alumna returning to Pittsburgh to pursue her other passion: Radio.
See stories by Hannah Gaskill