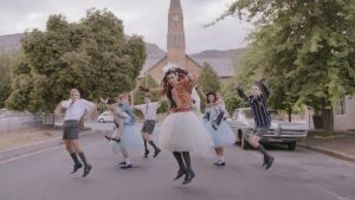 Join us for a screening of KANARIE, hosted by ReelQ. KANARIE (Afrikaans for ‘Canary’) is a coming-of-age musical war drama, about a young boy who discovers how through hardship, camaraderie, first love, and the liberating freedom of music, the true self can be discovered. (run-time: 2 hrs, 4 min) A coming-of-age war musical about a small town boy who gets chosen to serve his compulsory two year military training in the South African Defence Force Choir and Concert group- known as the “Canaries”- during the height of the Apartheid regime. ReelQ: Pittsburgh’s International LGBTQ Film Festival The Pittsburgh Lesbian and Gay Film Society serves the lesbian, gay, bisexual, and transgender communities in Pittsburgh and the surrounding tri-state region. In addition, PLGFS provides a crucial service to the cultural vitality of Pittsburgh, designed to support lesbian and gay artists, and to provide a much-needed cultural outlet for the lesbian and gay communities in Pittsburgh and the surrounding areas.