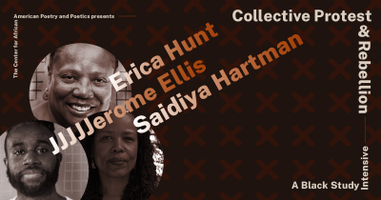 Composer, poet, and performer JJJJJerome Ellis’ work explores blackness, dysfluency, and music as “forces structured by, and that rearrange, time.” Conventional notions of time and time-limits, says Ellis, “assume that people have relatively equal access to time through their speech.” Saidiya Hartman’s innovative cultural histories investigate the precarity of black life as she tells the stories of the “unknown, the dispossessed, the disposable.” Using a mode she invented called, “critical fabulation,” Hartman creates the space for a new kind of knowing. Erica Hunt’s poetry and prose make starkly present “the polarization of the world,” and how the quotidian language, the language of the state and the media shrink our imaginations. What can save us? Hunt’s case, writing on the edge of language, or from the corner of the eye, provides an urgent other knowing from the cracks in America’s broken rhetoric. The Center for African American Poetry and Poetics’ (CAAPP) week-long Black Study Intensive, “Collective Protest and Rebellion,” features poet/essayist/novelist Dionne Brand, filmmaker Charles Burnett, filmmaker Julie Dash, poet/performer/composer JJJJJerome Ellis, poet Aracelis Girmay, scholar Emily Greenwood, writer/cultural historian Saidiya Hartman, poet/scholar Erica Hunt, interdisciplinary theater artist Daniel Alexander Jones­, photographer Zun Lee, poet/scholar Harryette Mullen, and poet Lyrae Van Clief-Stefanon as a way to think in creativity toward collective agency and social change. With urgency, we look toward the 2020/2021 academic year as an opportunity to, in Fred Moten’s sense of the word, “study” together, what he sometimes calls talking and walking around with other people, working, dancing, suffering, some irreducible convergence of all three, held under the name of speculative practice. This week we come together to engage in black study in community during this time of upheaval and repair. It is here where we seek innovative discovery in the act of creating as productive of new knowledges that help change the world. We hope you’ll join us for the entire week!