After 128 years, the Kaufmann clock still tolls, but in the coming months visitors meeting under it won’t be in front of a department store.

Macy’s, a Cincinnati-based department store chain, announced Monday the closing of the 13-floor Downtown Pittsburgh store at 400 Fifth Avenue. The building was sold earlier this year to Philadelphia-based Core Realty, which touts mixed-use redevelopment for the space.

“There are plans for an upscale hotel," said Jeremy Waldrup, president and CEO of Pittsburgh Downtown Partnership. "Then from (an) apartment perspective, I believe they are looking at 300 to 400 units in that building. We also hope to see some additional retail opportunities in that space -- maybe some smaller format retail that will help activate the ground floors both along Smithfield and Fifth Avenue.”

Mayor Bill Peduto said in a release his office is working with Macy’s and the new developer, Core, to preserve store icons such as the Kaufmann clock and the Tic Toc Restaurant.

The original timepiece was installed in 1887 when the first department store was built. The current clock was installed in 1913 when the shop expanded and Kaufmann's became a city landmark with the phrase, “Meet me under Kaufmann’s clock.”

May Department Stores Company acquired the building in 1946; Macy’s Inc. bought in 2005.

According to a Macy’s press release, the corporation has been investigating the best possible use for the property since 2011.

Waldrup said the location will provide Downtown with residential growth.

“We’re continuing to see the growth of the residential market in Downtown, and that’s really increased the vibrancy of the center city and this project will continue to accelerate that growth and development both from a residential perspective and also a hotel perspective,” he said.

About 30 Macy’s branch associates who work on the 11th floor will be relocated to another store in the Pittsburgh area, according to the press release, while the store's other 170 employees will be offered positions at nearby stores where possible. Employees, who were notified of the closure Monday morning, will also be offered severance benefits.

Waldrup said the Downtown Partnership provided insight to the developer offering data backing up the need for residential units.

“So we provided a lot of market information not just to Core but to really any developer looking at Downtown," he said.

Macy’s will start a final clearance sale at the Downtown store Monday. The sale is expected to run through September. 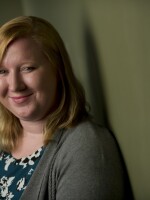 Sarah Schneider
Sarah Schneider comes to Pittsburgh by way of the prairie state of Illinois. She spent the summer of 2014 getting to know Pittsburgh as a reporting and photography intern with the Pittsburgh Post-Gazette. She now collaborates on special projects including the Life of Learning Initiative as the station’s PULSE - Pittsburgh Urban Leadership Service Experience - fellow. Sarah graduated from Southern Illinois University’s Journalism School in May. During her four years there she worked as a reporter and editor at the school newspaper, the Daily Egyptian. She has previously interned at newspapers in eastern Idaho and central Illinois. You can often find Sarah behind a camera documenting people she meets and discovering new places. She also enjoys reading, crocheting and National Geographic documentaries.
See stories by Sarah Schneider
Start your morning with today's news.
SUBSCRIBE
Latest News From WESA
DONATE TODAY