Economy & Business
90.5 WESA's 'Good Question' Series
90.5 WESA's Good Question! series is an experiment where you bring us questions—and we go out to investigate and find answers.So: What have you always wondered about Pittsburgh? Are you curious how your neighborhood originally received its name? Or maybe why the Mon and Allegheny Rivers are different colors when they merge at the Point? Or maybe you've always wanted to know what happened to all of our street cars and inclines? From serious to silly, we're here to help.

Giant Eagle Doesn't Monopolize Pittsburgh's Grocery Scene, So Why Does It Feel Like It?

Josh McIntyre moved to Pittsburgh two years ago after growing up in Latrobe, Pa. Standing in a back aisle of the North Side’s Giant Eagle on Cedar Avenue during a quiet evening, he said the store is the sole option in the neighborhood.

“The biggest problem in the overall market is just accessibility of grocery stores in the more Downtown, 'city proper area' of Pittsburgh,” McIntyre said.

It may feel to many Pittsburghers that there are few shopping options outside of Giant Eagle, but that’s not exactly true. According to 2018 market share data from ChainStoreGuide.com, Giant Eagle has 32 percent of Pittsburgh's metro area grocery market, including 68 stores and GetGos. Walmart and its Sam’s Club brand follow close behind with 28.3 percent.

Costco, Aldi and the various Shop 'n Saves hold around 5 percent each, and everyone else captures less.

That makes the store the region’s leader, but the company is far from a monopoly. So why does the company feel like a behemoth?

Founded here in 1931, Giant Eagle grew gradually over decades until it had one-fifth of the Pittsburgh market. Stephen Herzenberg, an economist and executive director of the Keystone Research Center, said the store’s big break came in the mid-1980s.

“It almost doubled its market share in the region,” Herzenberg said. “It was one part strategy, and one part luck.”

Following a six-week strike over a labor dispute, Kroger – Giant Eagle’s biggest competitor at the time – completely pulled out of Pittsburgh in 1984. Thanks to Giant Eagle’s size, Herzenberg said the company was in a great position to pick up a lot of Kroger’s former market share.

“And it did. And so that’s why some folks in the region, depends where you live, may have the impression that Giant Eagle’s even more dominant than it is,” he said.

Most of Kroger’s former locations eventually became Shop 'n Saves, but Giant Eagle also acquired several of the stores. By the mid 1990s, the company had doubled its market share to a little over 40 percent.

“Even though Walmart and Sam’s Club have become significant players since the 1990s, the last figures we have, Giant Eagle still had a third of the market,” Herzenberg said.

In addition, that perception of dominance may also be fueled by accessibility, Herzenberg said.

“There are some neighborhoods where there might be a Giant Eagle nearby, but not a Walmart or a Sam’s Club or an Aldi,” Herzenberg said.

That’s McIntyre’s experience. He cites the city’s North Side as an example. He and his wife often drive to Aldi for groceries, but not everyone can do that.

“If you’re somebody that’s limited to walking distance or limited to what you can take on public transportation, you have a really hard time finding options within the city limits,” McIntyre said.

This is part of our Good Question! series where we investigate what you've always wondered about Pittsburgh, its people and its culture.

In addition, Herzenberg said Giant Eagle is six or seven times bigger than the next largest local general supermarkets – or companies that exclusively sell a wide variety of groceries.

Giant Eagle spokesperson Dan Donovan said the grocer's status as a market leader signifies that the company is doing a good job of meeting customers' needs. And he said they're always innovating – such as with curbside pickup and online grocery ordering.

“So, as opposed to focusing on any one retailer, or any one period of time, what’s important is to focus on today,” Donovan said. “For Giant Eagle, our commitment is serving our customers today, tomorrow and in to the future as best we can.”

The supermarket scene in Cincinnati, Kroger’s hometown, is far closer to a monopoly than Pittsburgh’s. There, Kroger dominates with 48.5 percent. In the combined Cleveland/Akron metro area, Giant Eagle is the second-largest store with nearly 24 percent. Walmart edges out Giant Eagle by less than a half a percent to claim the number one spot.

In Columbus, the largest city in which Giant Eagle and Kroger compete head-to-head, Kroger also dominates with about 43 percent. Giant Eagle is the fourth-largest there, with 8 percent of the market.

Despite their current position at the top of the Pittsburgh market, Giant Eagle’s future is less certain.

Jeff Inman, a marketing professor and associate dean of the University of Pittsburgh’s Katz Graduate School of Business, said that’s because of changes in the grocery industry. He said consumers are now more accustomed to channel burning, or shopping for groceries across a variety of stores. Plus, Giant Eagle has strong competition.

“Walmart is almost as big as Giant Eagle. As a matter of fact, it looks like within the next two, three or four years, Walmart will be bigger,” Inman said. “Which is a huge shift over the last 20 years. It’s amazing.”

Inman said the grocery industry has undergone tons of consolidation over the past few decades.

As part of that, Giant Eagle may have to merge with a larger rival to stay competitive. But Donovan said the company is still growing and doing well.

“At this point in time, and for the foreseeable future, we are extremely committed to remaining Pittsburgh based, Pittsburgh owned and serving our customers,” he said. “Today, there’s an immense amount of competitive activity in our market, and that’s where Giant Eagle is focused.” 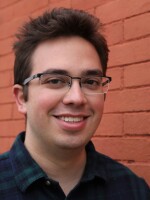 Jakob Lazzaro
Jakob Lazzaro is a digital producer at WESA. He comes to Pittsburgh from South Bend, Ind., where he worked as the senior reporter and assignment editor at WVPE and had fun on-air hosting local All Things Considered two days a week, but he first got to know this area in 2018 as an intern at WESA (and is excited to be back). He graduated from Northwestern University in 2020 and has also previously reported for CalMatters and written NPR's Source of the Week email newsletter.
See stories by Jakob Lazzaro