Wood Pellets are big business. U.S. companies send almost a billion dollars worth of wood pellets to the European Union, which uses them to power energy plants. But the appetite overseas for wood pellets has conservationists in the U.S. worried about our forests. Arkansas Public Media's Jacqueline Froelich reports.

JACQUELINE FROELICH, BYLINE: Here in Pine Bluff, Ark., tons of pine tree trunks and limbs tumble through a giant drum debarker at Highland Pellets. These logs are dragged by a chain conveyor into a massive steel chipper.

BOBBY TAYLOR: We're growing so many pine trees in Arkansas that we needed somewhere else to take them, so this has really been a huge thing for our industry.

FROELICH: Sixteen industrial mills across the Deep South, from the Carolinas to Arkansas, currently produce 6.8 million metric tons of export pellets. That's enough to fill 272,000 tractor trailers. Enviva is the region's largest pellet producer. It harvests branches and limbs left over from logging as well as small and mature trees not suitable for lumber. Most of it is from private forests. Enviva's Jennifer Jenkins says her company complies with strict timber management practices, and there's plenty of biomass for the taking.

JENNIFER JENKINS: Every year, in the Southeast U.S., 2 percent of the forests are being harvested while the other 98 percent are growing.

FROELICH: Pellet producers here refer to these overflowing southern timber stands as America's wood basket, but Adam Colette with the Dogwood Alliance in Asheville, N.C., says biodiverse southern woodlands should not be treated like a commodity.

FROELICH: Colette worries about the future. Demand for wood pellets is expected to surge, given both the European Union and U.S. classify wood biomass as a carbon-neutral fuel. Thomas Buchholz is a scientist with Spatial Informatics Group and researches biomass. He says that carbon calculation is hazy, given that when wood pellets are burned, they can often emit more carbon than coal. He suggests making pellets from diseased and invasive trees and forest restoration debris, what he calls conservation biomass.

THOMAS BUCHHOLZ: In the end, the carbon that's stored in a untouched forest is very hard to beat.

TOM REILLEY: Highland uses forest thinnings, which are low-value trees, along with tree tops, limbs and recyclable material from sawmills such as wood shavings, chips and sawdust. 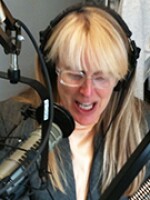 Jacqueline Froelich
Jacqueline Froelich is an investigative journalist and has been a news producer for KUAF National Public Radio since 1998. She covers politics, the environment, energy, business, education, history, race and culture. Her radio segments have been nationally syndicated. She is also a station-based national correspondent for NPR in Washington DC., and recipient of eight national and state broadcast awards.
See stories by Jacqueline Froelich
Latest News From WESA