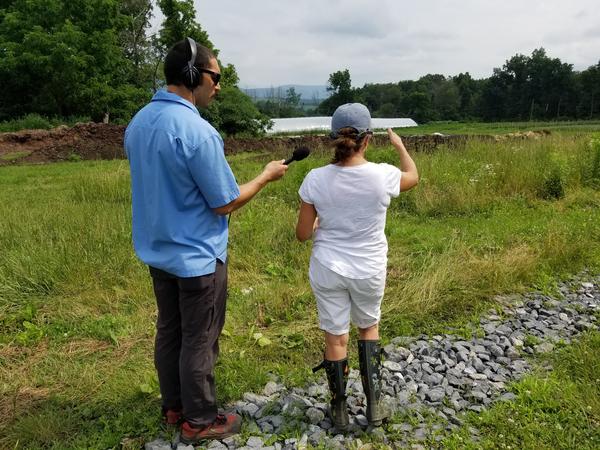 It takes at least 100 years for one inch of topsoil to form. In Pennsylvania, farmers are becoming increasingly interested in managing soil to produce healthier, more sustainable crops.

On her small vegetable farm in Centre Hall, Kim Tait, owner of Tait Farms, pulls fresh garlic from the dark brown soil. You can hear the soil crumble. Tait is one of many farmers in Pennsylvania who have begun focusing more on managing the soil for better crops. The phrase they often use to refer to that management goal is “soil health,” which is the ability of the soil to produce plentiful and healthy crops.

“Our goal is to always put more back into the soil than we take out,” Tait says.

There are many ways to make a soil “healthy,” one of those ways is to plant cover crops – like winter pea or hairy vetch – before sellable crops. Cover crops add organic matter, the stuff made from plants and microbes at all stages of decomposition – anything that is living or has lived. Think of compost. Organic matter is essential to soil fertility because it holds water and nutrients. But cover crops do more than just that.

“Cover crop is a great way to keep erosion at bay, keep weeds at bay, as well as add to the fertility once you turn it in,” Tait says. “All of this green matter becomes part of the overall fertility of the soil.”

Some cover crops that Tait uses, like winter pea actually take nitrogen from the air and make it available to plants. Tait also adds her own compost. She says that she’s doing more to manage the soil than she ever has before.

“Cover cropping and composting, all those sorts of things are a bit more conscious and evolved than it’s been in times past,” Tait says.

Tait is not alone in promoting soil health. Franklin Egan, the educational director of the Pennsylvania Association for Sustainable Agriculture, or PASA, says many farmers across Pennsylvania are thinking about managing soil sustainably.

“They were telling us that they wanted to keep a close eye on soil health. That was a core concept of sustainability” Egan said.

Egan sees part of his job as bringing farmers and knowledge together. He’s noticed that many farmers are taking initiative and are hungry for information about soil health. Following the demand, PASA has created a Soil Institute where they co-learn with farmers and offer free classes with titles like “Living Soil, Vibrant Crops.” Egan has an idea of why there’s increasing excitement about soil health.

“I think it’s certainly having a real moment right now of exploding interest,” Egan said. “It’s a concept and it’s a goal that so many different types of farmers can get behind and are interested in.  So that’s, I think, one of the reasons why it’s such an important thing right now.”

“It’s definitely not a new thing. It’s something that we’ve been relying on forever, for ages,” Borrelli said. “We’ve had experiences – we have historical examples – of when you don’t care for your soil what happens where civilizations fall.”

One notable soil disaster in American history is the Dust Bowl, which was caused in part by poor soil management like over-tilling which made the soil prone to erosion.  While the Dust Bowl may be far from our collective memory, Borrelli says that soil should still be managed as a natural resource, just like water and air. And it’s not just farmers that can get involved to promote soil health.

“We all are part of the same thing and we can work together and consumers drive choices that drive marketing that drive farmers.” Borrelli said. “It is part of the soil health movement.”

“You know it’s a really thin layer of life on the surface of this planet that keeps us all going and we have to take care of it,” Egan said.

He also says that soils store carbon, keeping carbon dioxide – a greenhouse gas – out of the atmosphere.

A new analysis estimates that Pennsylvania’s medical marijuana market will rake in $60 million in revenue this year, a number that's expected to quadruple to about $240 million by 2020.

Flanked by children as he walks the perimeter of the Ammons Community Recreation Center in the Hill District, Charles Bonner makes his way to the Olympic-size swimming pool. He unlocks security gates, checks chlorine levels and proceeds to greet enthusiastic attendees of his summer swimming program.

The 28-year-old Bonner serves as head lifeguard at Ammons, a job he said he’s been preparing for since he was a teenager.

“Starting back in 2005, I was a program counselor,” Bonner said. “One of the positions I had to have was lifeguarding. It was actually my first job."

Toxins Turning Up In Dozens Of Public Water Systems

Lauren Woeher wonders if her 16-month-old daughter has been harmed by tap water contaminated with toxic industrial compounds used in products like nonstick cookware, carpets and fast-food wrappers. Henry Betz, at 76, rattles around his house alone at night, thinking about the water his family unknowingly drank for years that was tainted by the same contaminants, and the pancreatic cancers that killed wife Betty Jean and two others in his household.