On today's program: A recap of the results from Pennsylvania’s delayed primary election; courts in Allegheny County reopen with new restrictions; and police look for more information about the homicide of Tionna Lashay Highsmith, who died this year after being wounded 15 years ago.

The first modern election in Pennsylvaniato take place during a pandemic ended last night, and despite a few problems, including one Penn Hills polling site that had to bekept open an extra hour because of long lines, the election went “fairly smoothly,” says 90.5 WESA’s government and accountability editor Chris Potter.

As of 3 a.m. Wednesday, Allegheny County had scanned all 207,000 mail-in ballots it received. An estimated 73,000 additional mail-in ballots had yet to arrive, but could potentiallystill be counted under Gov. Tom Wolf’s latest executive order.

Though the county expects to finish tabulating in-person votes today, this year’s switch from electronic to paper ballots means it could take some time for the winners to be announced. But initial reports showlocal progressive women pulling ahead in the primary election including first term state Representative Summer Lee.

Courts in Allegheny County reopened Monday with some precautions due to the pandemic, after the state Supreme Court lifted its emergency declaration. To prevent crowded hallways, cases are staggered, floor markings allow people to keep their distance in the courtrooms, and jury trials in criminal and civil courts remain suspended for the time being.

There are legal implications to these jury restrictions, says WESA’s legal analyst and University of Pittsburgh law professor David Harris.

“For civil cases it simply means there’ll be a wait, but for criminal cases it really is a concern,” he says. “There is a right that criminal defendants have in both the federal constitution and the state constitution to a trial by jury, and not having a jury trial in certain kinds of cases could disadvantage a defendant, and so the block on jury trials for now is a real concern.”

Pennsylvania state laws require that criminal cases go to trial within 365 days after the criminal complaint is filed, and Harris says that postponement of jury trials could result in the infringement of some defendants’ rights to a speedy trial. But balancing defendants’ rights with the rights of witnesses, jurors, and court personnel to be safe and healthy is difficult, he says.

“When we talk about our constitutional rights, there is a tendency, I think, to think in absolutes—‘I have a right to this, therefore I get this, and any impingement on this right is incorrect.’ In reality, rights are sometimes in conflict, and we have to accommodate,” says Harris, host of the Criminal Injustice podcast.

“There are many things in play here, and that’s what makes it such a difficult moment.”

In August of 2005, then 14-year-old Tionna Highsmith was at a church carnival in Brighton Heights when shots rang out. She was hit by a butted that became lodged in her spinal cord, paralyzing her from the waist down. In January, half-a-life later, Tionna Highsmith died as a result of those injuries. Pittsburgh Bureau of Police are working on her case again, this time as a homicide.

Pittsburgh Bureau of Police Public Information OfficerChris Togneri first met Highsmith in 2014, when he was a reporter at the Tribune-Review working on a story aboutshooting victims who survive with bullets still in their bodies. He says that Highsmith was known for being positive and resilient.

“There was just an incredible sense of optimism and it was striking to be talking to her about this tragic turn of events in her life—and in fact, she said that she was fortunate to have gone through this experience, to be shot and paralyzed because it helped her become the person that she was,” he says. “She was a remarkable, incredible person, and you got that sense the moment you started talking to her.”

Det. Joseph Bielevicz says it’s not unusual for new charges to be filed years after the initial crime. He hopes that getting Highsmith’s story out to the public will encourage people to contact him.

“We have a strong belief that there are people out there who have information on this who know who did it and could come forward and really help us make this case,” he tells The Confluence.

Bielevicz asks that anyone who has information on Highsmith’s case call the Pittsburgh Bureau of Police Homicide Squad at 412-323-7161.

The Confluence, where the news comes together, is 90.5 WESA’s daily news program. Tune in weekdays at 9 a.m. to hear newsmakers and innovators take an in-depth look at stories important to the Pittsburgh region. Find more episodes of The Confluence here or wherever you get your podcasts. 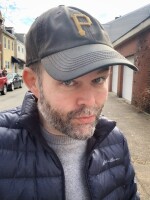 Doug Shugarts
Doug Shugarts is a 23-year veteran of broadcast news. Doug began his career at WBUR in Boston, where he worked on the nationally-syndicated programs “The Connection” and “Here and Now.” He won awards for best use of sound, coverage of the 2003 war in Iraq, and helped launch the station’s local news program, “Radio Boston.” In 2014 Doug moved across town to GBH and helped reboot morning news programming and launch other broadcast and web projects. Doug studied Composition at Berklee College of Music and Computer Science and Mathematics at the University of California. A resident of Pittsburgh’s Southside, Doug enjoys feasting on arepas and yucca fries at Cilantro and Ajo and meeting his canine neighbors at Big Dog Coffee.
See stories by Doug Shugarts

Julia Zenkevich
Julia Zenkevich is a general assignment reporter for 90.5 WESA. She first joined the station as a production assistant on The Confluence, and more recently served as a fill-in producer for The Confluence and Morning Edition. She’s a life-long Pittsburgher, and attended the University of Pittsburgh. She can be reached at jzenkevich@wesa.fm.
See stories by Julia Zenkevich

Latest News From WESA
Subscribe to The Confluence podcast