By The Kid Mero,
Desus Nice

For Tiny Desk Playlists, we ask musicians, creators and folks we admire to choose the Tiny Desk concerts they've come to love. As a proud member of the, I realized we made it when hitpodcastandlate-night talk showhosts Desus and Mero threw us afriendly jabon their show last year. Having recently added 'author' to their resumes, we figured this to be the perfect time to ask the Bronx ambassadors to list their favorites. They sent us two separate lists of five in true Bodega Boys fashion, proving that the fandom is mutual.—Bobby Carter

If I had to describe a Tiny Desk concert, the closest equivalent would be getting an unexpected onion ring with an order of fries. You knew you were getting something delicious and—surprise—here's a completely unexpected bonus to that. Tiny Desk gives you your favorite artist performing your favorite songs, but switching them up into a new tune with new melodies and rhythms, sometimes completely changing the tone of a song. It's similar to witnessing a birth.—Desus Nice

I'm a huge Koffee fan. I used "Toast" as my walk-up song during a celebrity softball game where I went 0-for-2. Koffee's only 20, but she's already the first woman to win a Grammy for Best Reggae Album. This performance was so ill, the backing band was so rhythmic and grooving. BIGGUP JAMAICA!

Melanie Faye feels like family to me because we've been following each other on Twitter forever. One of her videos floated down my timeline one day and the voice, skills and talent blew me away. I've been watching her growth as a person and an artist and seeing her get a Tiny Desk concert had me cheering like an uncle at a graduation who claps even though the dean told the crowd to wait until all the names are called to applaud.

Way back in the early 2000s, I was on a date. It was my first time at Joe's Pub and my first time eating wasabi peas so the night was already epic. The artist performing was Raul Midón. He killed his show so well, I purchased a CD-R afterward. This Tiny Desk concert has the same energy as that performance at Joe's Pub. The guitar seems like an extension of his body.

I discovered Billie Eilish last year during her performance at Coachella and immediately became a fan. The stripped-down versions of her songs she performs during this Tiny Desk are so lo-fi and chill, it's like music incense. Also seeing her relationship with her brother is beautiful.

Chika is the homie! Met her in LA and she's wild smart and funny at the same time, so we clicked. So much damn talent, the vocals, the flows, the lyrics. The confidence when she's performing is apparent, yet it's like she's not going 100% because she doesn't need to because she's already killing it and she knows it. This Tiny Desk is a perfect example of how Chika will be a force to reckon with musically.

Thundercat is soulful AF. This was a great one because I think he opened his eyes like twice. When you are playing the s*** out of a guitar and singing like an angel you have to close your eyes. I learned that in chorus in high school. That last sentence was a lie. Thundercat is the s***.

Why is this on my list? You're kidding, right? This guy is a legend. HE MADE BOB BOILEN CRY!!! To Bob's point, "Father & Son" is wild to listen to after having a son. Also, he's old but cool as f***, something to aspire to.

Benny takes me back to staying up late listening to freestyles on the radio. Griselda been killing it. This is Timb boot rap, which means it is right up my alley. We would drive around lighting a Newport off another Newport and listen to muthaf****** that rapped like this. 6 a.m. but we ain't closin' shop!

These are my guys. Watching them do them is inspiring, they are off the hook live and wild-high energy. It was dope to see them in the Tiny Desk setting. "when I'm gone" is the rare song about real s*** that isn't super corny. The live background vocals make it super hit.

Another GOAT. She took over that whole Tiny Desk, and set a tone. SHE ALWAYS DOES THAT!! The way she pivots from a joke into "Rimshot" is high-level art. I maintain that Baduizm is one of the best albums ever. It's still in the CD changer in my '05 Honda Accord. I've mentioned that before, not because it's 2020 and the CD player is stuck and I'm embarrassed to get my car's "CD player" fixed. I am eternally grateful it decided to get stuck on Baduizm. 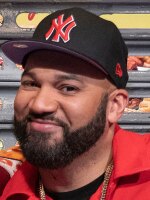 The Kid Mero
The Kid Mero is a comedian, author, podcaster, and co-host of DESUS & MERO on Showtime.
See stories by The Kid Mero 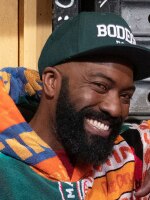