Youth Homelessness On The Rise In PA, Numbers Increasing Faster Than U.S. Average

The number of homeless public school students in Pennsylvania increased by more than 30 percent from 2015-2018, according to a report released last month by the National Center for Homeless Education.

The study collected federal data on homelessness in public school districts across the country, as reported by state educational agencies, for the school years 2015-16 through 2017-18. The report found that, across the United States, the number of enrolled students experiencing homelessness rose by 15 percent in the three school years for which data was recorded.

According to Carlos Carter, Executive Director of the Homeless Children’s Education Fund, the lack of affordable housing in Allegheny County makes it difficult for families to maintain stable housing. A study released in 2019 from the National Low Income Housing Coalition reported that Pittsburgh has 51 affordable homes for every 100 extremely low income renter households.

Carter said there are a number of other factors that exacerbate housing instability for youth in Allegheny County, including poverty, trauma and family conflict. Particularly vulnerable groups include youth of color as well as the LGBTQIA population.

Homelessness doesn’t always equate to living on the street, Carter said. The bulk of homeless youth bounce around between different living places — also known as “couch-surfing” — or live doubled up with friends or relatives. According to fund's website, this doubled-up subgroup comprised 64% of homeless students during the 2016-17 school year.

After school programming, mental health services and general support, Carter said, can all improve a child’s access to education and contribute to breaking the cycle of homelessness. 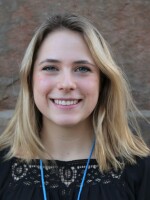 Caroline Bourque
Caroline Bourque is a senior at the University of Pittsburgh and production intern for The Confluence. She also currently serves as managing editor of Pitt’s student-run newspaper, The Pitt News, where she’s spent the past four years covering everything from the local music scene to visits from presidential candidates. Previously, Caroline interned at Pittsburgh Magazine and the Philadelphia Film Society, and has also worked at Pitt’s Open Lab assisting students, faculty and staff with Virtual Reality, 3D printing and 360 degree video projects. Last spring, she spent a semester abroad studying film in London and would love to return someday soon.
See stories by Caroline Bourque