Pittsburgh's History In Comics: The Steel City's Appearances Through The Years

Big comic publishers such as Marvel and DC Comics often use set their stories in real places, or fictional cities like Gotham in DC and Madripoor in Marvel. Pittsburgh, no surprise, is a popular location.

Comic book writers from both publishers began to use Pittsburgh in their storylines nearly 80 years ago. DC Comics first referenced Pittsburgh in April 1941 — “All-Star Comics” Issue 4 talks about Pittsburgh’s industrial history, as “The Spectre” stops a sabotage at a munitions factory.

A few months later, Marvel referenced Pittsburgh in “Marvel Mystery Comics” Issue 23. The Human Torch finds Nazis hiding out in a tank company, and discovers a secret base below a Pittsburgh-to-Harrisburg highway.

“Including Pittsburgh and Harrisburg and Mechanicsburg — even towns as small as that — would just sort of make that authenticity more real,” Henry said.

During the silver-age of comic books — the commercial breakthrough in mainstream American comic books between 1956 and 1970 — Marvel stories based in Pittsburgh referenced a fictional steel mill.

“The earliest mention of Pittsburgh would be that issue of Thor, where he came to the U.S. to repair his hammer,” Frenz said.

In 1980, the city became a crucial part of a two-part Avengers story called “Peril in Pittsburgh.” Thor visits the city to fix up his hammer, "Mjonir," and proclaims "I knew that here in the great blast furnaces of Pittsburgh I would find a giant forge to mend my hammer!” The steelworkers present are visibly stunned by Thor's power.

Often the city’s inclusion in storylines was driven by a personal connection of the writing staff. Pittsburgh got its first born-and-raised hero in October of 1986 when Marvel created “The Star Brand.” It was the brainchild of former Marvel editor-in-chief Jim Shooter, also a Pittsburgh native, although only seven issues were written.

“Star Brand was a character that was … to some degree autobiographical, and part of that was he lived [here], and all the stories took place in western Pennsylvania, more the most part,” Frenz said.

Shooter worked at Marvel between 1978 and 1987 and wrote notable comics such as “Marvel Superheroes Secret Wars” and “Legion of Super-Heroes.” When Shooter stopped working for Marvel, illustrators began to portray Pittsburgh differently.

“With The Avengers … they created a bad guy,” Frenz said. “That revolved around the steel mills.”

Both Frenz and Henry said they always enjoy seeing Pittsburgh in media, most recently in film. The city has been the backdrop for dozens of movies, including The Avengers, The Dark Knight Rises and Jack Reacher. Sometimes, though, Frenz said he laughs when he sees how creators choose to show location.

“Anytime you see a movie that’s shot in Pittsburgh, you go, ‘Oh, that’s interesting. He just left downtown and ended up in Squirrel Hill,” Frenz said. “You’re always noticing what they don’t get.”

The inaccuracies also make their way into comic books, like in “The Amazing Spider-Man” Issue 292. In it, illustrator Alex Saviuk sketched the towering Cathedral of Learning in a location that does not look like its actual home in the Oakland neighborhood.

Frenz said there are several Pittsburghers who have gone onto work in illustration.

“We have a fairly impressive bunch of people that developed and evolved out of Pittsburgh that worked in and around the comics industry,” he said.

Frenz and Herny currently work together on “The Blue Baron,” a comic series based in Pennsylvania. Their work focuses on a 300-year-old hero who deals with switching bodies with a 13-year-old from Mechanicsburg.

“Yeah, the character, the Blue Baron that Ron draws, is he's a Pennsylvanian, born and bred,” Herny said. “And Pennsylvania is helpful because it obviously has a history that goes back almost to the beginning of the United States and revolutionary times.”

Check out when the Steel City appeared in D.C. and Marvel comic books through the years below: 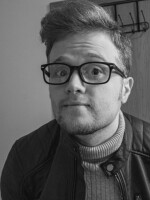