Black and white images by famous Black photographers, like Charles “Teenie” Harris, are the focus of a new student art program. Local photographer Randall Coleman is teaching students across the region how to colorize old photos.

Coleman said that colorizing isn’t meant to replace black and white images — instead, it adds context. He specifically chooses photographs that illustrate Black dignity and Black joy. One way he finds images is by searching through collections from various African American photographers. He also notes historical photos that are posted online. According to Coleman, copyright law allows him to use the content for educational purposes.

Currently, Coleman is teaching sixth grade students at Baden Academy Charter School. Students start by colorizing a close-up image of Muhammad Ali’s hands using Snapseed, a photo editing app. Coleman guides them through each step — making sure skin tones are accurate, fingernails are the right color, and explaining the impact of complementary and contrasting colors. Over the course of eight sessions, students become more confident in their photo colorizing skills. They also learn the significance of the Black figures behind — and in front of — the camera.

“As we are going through each class, I'm giving them a bit of history as well. So they're not only learning how to colorize a black and white image,” Coleman said, “but they're also learning about history.”

For example, students learn about Carter G. Woodson, a prominent African American writer and historian, and colorize a photo taken backstage at a Harlem fashion show.

Coleman first learned about the process of colorizing as a student at Duquesne University. During the COVID-19 pandemic, he started playing around with colorizing images taken by some
of his favorite photographers, such as Charles “Teenie” Harris and Gordon Parks.

During a previous teaching residency at Lincoln Park Performing Arts Charter School, a student approached Coleman with a black and white photo of their grandparents. Even though the student never had a chance to meet their grandfather, colorizing the photo sparked conversations and familial pride.

“For me, that's what it's all about. Whether it be your own family member or someone that you admire or someone from your own culture, your own background,” Coleman said, “being able to show them in a good light and say, ‘Hey, this is who they are’ and making them relatable using color. I mean, that's incredible.”

This Saturday, Coleman is leading a colorizing workshop for high school students and adults at the Trust Arts Education Center.

Updated to include a revised description of Carter G. Woodson, and include links to Randall Coleman's social media pages. 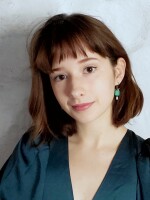 Maria Anto
Born and raised in Ligonier, Pa., Maria Anto grew up listening to 90.5 WESA. She is thrilled to be promoted from listener to contributor as a news production assistant for WESA. A senior at the University of Pittsburgh, Maria sings in the Heinz Chapel Choir, serves as a PITT ARTS host, and conducts archival research on puppets in Pittsburgh.
See stories by Maria Anto
Give $5/month today to support WESA and you'll receive a subscription to Pittsburgh Magazine.
Give Now