Fans of the late Pittsburgh rapper Mac Miller gathered in Blue Slide Park a day before the one-year anniversary of his sudden death. Miller, whose real name was Malcolm McCormick, died of an accidental drug overdose in his Studio City, Calif. home last year.

Friday's event brought together people from across the country to the iconic park, just blocks away from Miller's alma mater, Taylor Allderdice High School. He released several albums and mix tapes between 2010 and 2019, including “Swimming” one month before his death for which was nominated for a Grammy Award.

In October 2019, a tribute concert was held in Miller's honor with fellow rappers and friends. The event, along with online donations, raised more than $935,000, which Miller's family put into a grant fund. East Liberty's Hope Academy of Music and the Arts was the first recipient of a $50,000 grant. The organization plans to use the money to expand its Suzuki music program.

Earlier this week, federal authorities arrested a California man on charges that he sold pills laced with the opioid fentanyl to Miller, resulting in his death. 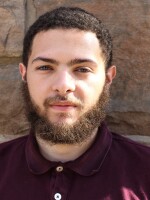 Sean Spencer
Sean Spencer was born and raised in Pittsburgh, Pa. He currently studies Multiplatform Journalism and Web Design at Duquesne University. Sean has interned at the 9/11 Tribute Museum in New York City and at The Partnership in Education in Pittsburgh. He currently works as a coordinator for the Journey to Medicine mentor program. After graduating, he plans to pursue his MBA and hopefully find a job in Communications or Digital Media.
See stories by Sean Spencer

Katie Blackley
Katie Blackley is a digital editor/producer for 90.5 WESA, where she writes, edits and generates both web and on-air content for features and daily broadcast. She's the producer and host of our Good Question! series and podcast. She also covers history and the LGBTQ community. kblackley@wesa.fm
See stories by Katie Blackley